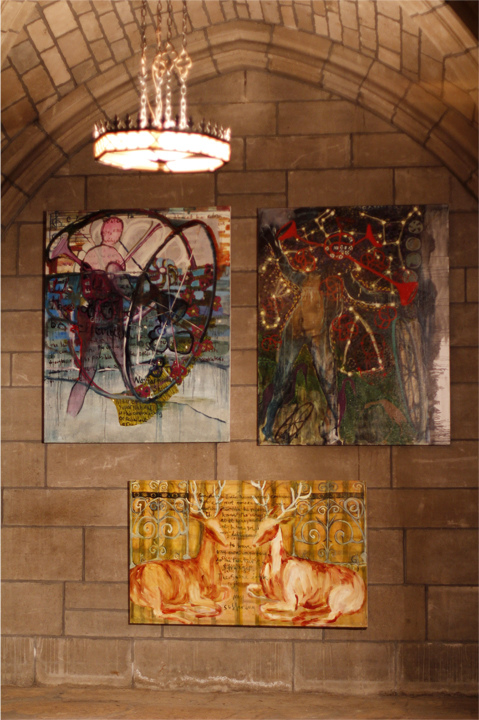 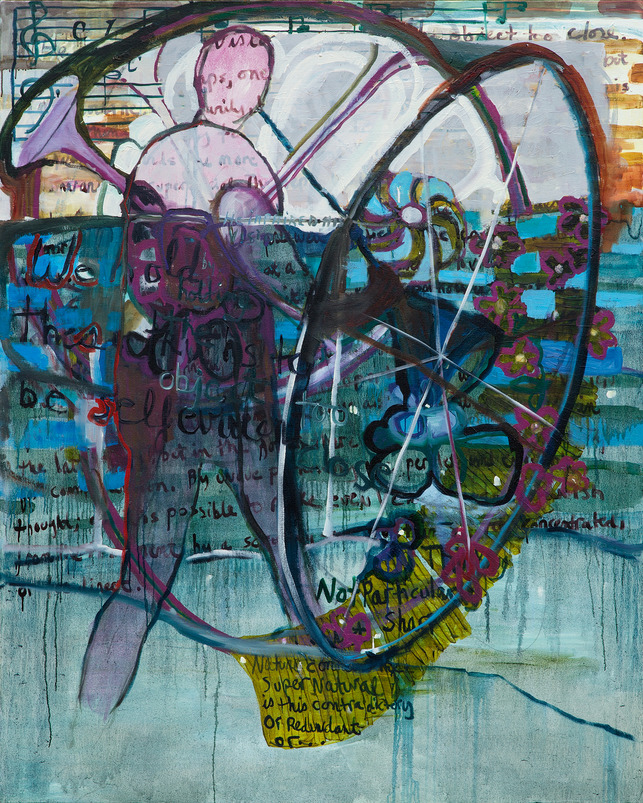 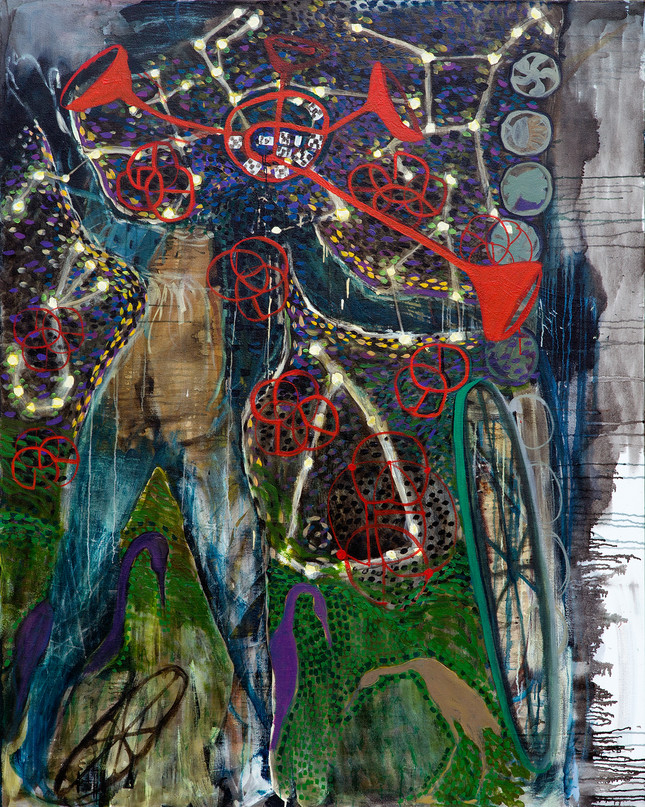 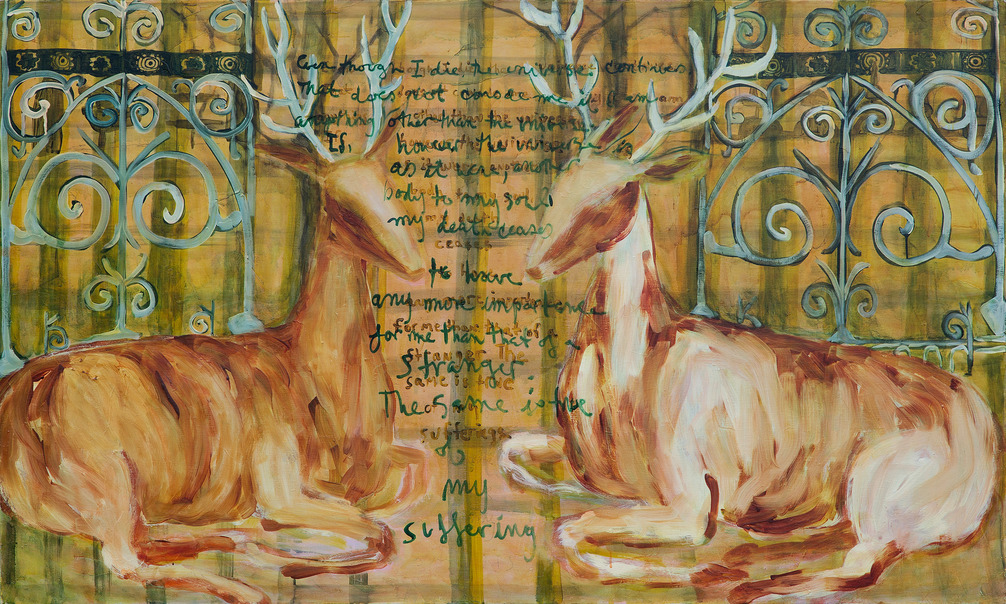 In making the paintings for Mithraeum 99 I chose to focus on themes of contemplation, of death and transition, and of identity, specifically American identity. At issue in each painting is a moment or point of awareness and passage, and related questions:
– How do we reconcile ourselves to death, and our own deaths?
– How do we reconcile the hypocrisy of our history – the cruelty of slavery with the great achievement of constitutional democracy?
– How do we acknowledge and address the rising floodwaters of environmental degradation and catastrophe?
– How can we change our abusive relationship with animals, which assumes their sacrifice for our needs?
– Why is it so hard to be guided by mystery?

The wheel and the trumpet or horn appear regularly in my work. Wheels can represent many things: Dharma, law, fate, time, labor, our relationship to land and animals and, of course, passage. Horns immediately evoke music, but they also bring to mind breath, the movement of air through space and time, and the wind, and the sounds of nature transformed into music. Horns maintain a rich paradox – they can blast a battle call, summon religious observances, mark the rising sun and awaken dreamers, or morn a passing. They are embedded within our cycles, connecting the shared past with the present and the future. These symbols are layered with others – textile pattern, constellations (the night sky on each night when a family member died), Jefferson’s garden plan for Monticello, rising floodwaters, the design of the church cemetery’s iron fence. These combinations reference specific and shared histories, as well as this present moment in time with the uncertainty of the future pressing in, without offering an answer beyond acknowledging commonality among all people and summoning reflection.

The texts emphasize spiritual questioning, but also present and underscore the complex theme of American identity. The painting titles provide reference to their sources. Simone James refers to Simone Weil and James Audobon. Edith Webster refers to Edith Manon, who has a memorial stone in the church cemetery, and my brother, Webster Terhune. Thomas Poe refers to Thomas Jefferson and E.A. Poe. The quotes, while unreadable in the paintings, are as follows:

Simone James uses a quote from Gravity & Grace by the philosopher/mystic Simone Weil:

Even though I die, the universe continues. That does not console me if I am anything other than the universe. If, however, the universe is, as it were, another body to my soul, my death ceases to have any more significance for me than that of a stranger. The same is true of my sufferings.

Thomas Poe uses a quote from E.A. Poe, a quote from the Declaration of Independence, and a note from my sketchbook:

He impaired his vision by holding the object too close. He might see, perhaps, one or two points with unusual clearness, but in so doing he, necessarily, lost sight of the matter as a whole. Thus there is such a thing as being too profound. Truth is not always in a well. In fact, as regards the more important knowledge, I do believe that she is invariably superficial. The depth lies in the valleys where we seek her, and not upon the mountain-tops where she is found. The modes and sources of this kind of error are well typified in the contemplation of the heavenly bodies. To look at a star by glances – to view it in a sidelong way, by turning toward it the exterior portions of the retina (more susceptible of feeble impressions of light than the interior), is to behold the star distinctly – a luster which grows dim just in proportion as we turn our vision fully upon it. A greater number of rays actually fall upon the eye in the latter case, but in the former, there is the more refined capacity for comprehension. By undue profundity we perplex and enfeeble thought; and it is possible to make even Venus herself vanish from the firmament by a scrutiny too sustained, too concentrated, or too direct.
– EA Poe, The Murders at the Rue Morgue

We hold these truths to be self-evident . . . .
– T. Jefferson, Declaration of Independence

Nature contains supernatural. Is this contradictory or redundant or not particularly sharp thinking?
– E. Terhune, notebook